Elasticity of demand: if you get a pay raise, buy caviar not bread

The elasticity of demand is its responsiveness to changes in another factor, such as price. British economist Alfred Marshall is generally credited as the first economist to define the concept in 1890, but the German statistician Ernst Engel published a paper five years earlier, showing how changes in income alter the level of demand. The origins of the concept may be disputed, but its importance is not.

Elasticity of demand quickly became one of the most widely used tools of economic analysis. Marshall had been one of the first to formalize the idea that demand fell as prices rose. It took only a small step from this to see how the demand for different products (such as bread and caviar) varied by differing amounts when the price of those products changed. Marshall saw that when prices changed for necessities such as bread, demand changed very little.

Bread is very unresponsive to changes in price because it has few substitutes. On the other hand demand for luxuries might be much more responsive to price—such a product is said to be “price-elastic.” Marshall recognized that among people on average incomes, demand for a luxury such as caviar is much more sensitive to price change than it is among the super-rich, who can afford as much as they like.

Ernst Engel argued that as people grow richer, they increase spending on food by less than their increase in income. Demand for food is “income-inelastic”—an idea that became known as Engel’s law. 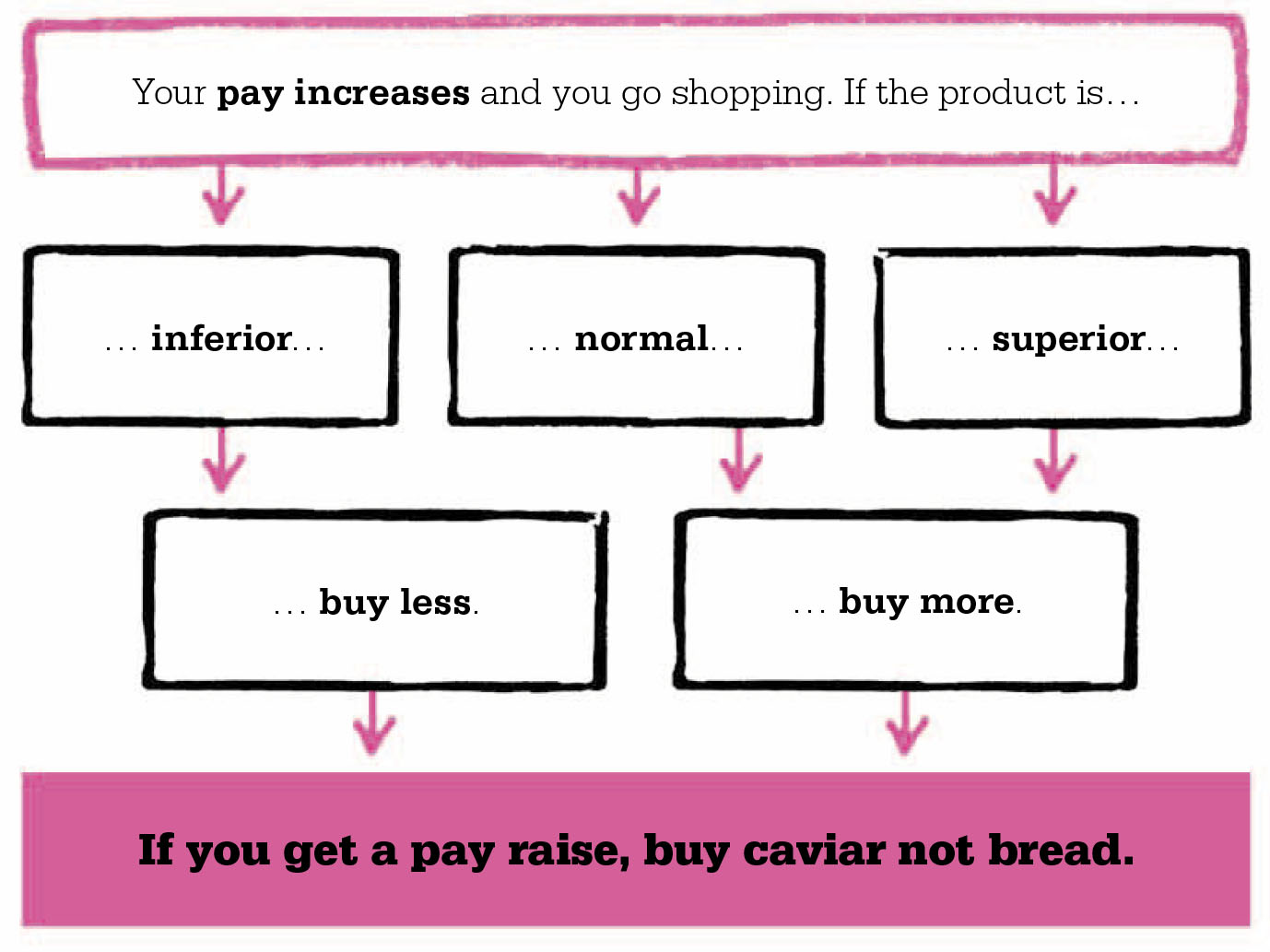 Engel studied the budgets of 199 households in Belgium and showed that while demand for basic necessities such as food grew less quickly as income rose, demand for luxuries—such as vacations—grew at least as quickly as the increase in income. Economists have identified two types of products or goods. The first—normal goods —are those where demand rises in line with income. Luxuries are a special type of normal good, known as a superior good, where demand rises proportionately more than the rise in income. The second type of goods—inferior goods—see demand fall as income rises. Some groups of goods, such as food, contain both luxuries and necessities (such as caviar and bread). This means that it may be misleading to judge the impact of increasing income on food as a group.

A further complication is that a product is not always normal or inferior—this may change at different levels of income. Given extra income, very poor people might buy more bread, those on high incomes might buy more caviar, but the super-rich might choose to give up caviar and dine on edible gold flakes instead.

The poorer the household, the larger the proportion of its budget dedicated to nourishment

Born in Dresden, Germany, in 1821, Ernst Engel studied mining at the École Des Mines in Paris, France, where he came under the influence of Frédéric Le Play, a pioneer in the study of family budgets. On his return to Germany Engel became the director of the statistical bureaus of Saxony and then Prussia, where he formulated the law that was to bear his name. In 1881, Engel wrote an article attacking Chancellor Otto von Bismarck’s agricultural protectionism and was promptly “retired” on health grounds.

Engel was part of the German historical school of economics. A prolific writer, he believed in reforming policy to improve the lives of the working classes. Perhaps his greatest legacy was his influence in the creation of institutions for statistical analysis in many European countries. Engel died near Dresden in 1896, aged 76.