The competitive market: companies are price takers not price makers 2

The assumptions of Marshall’s model create certain consequences for firms in perfectly competitive industries. One of the most important of these is that firms have no power over the price that they can charge. This is because there are so many firms selling an identical product that if any one firm attempts to sell at a price higher than its competitors, it will sell nothing.

This is virtually guaranteed because the consumer has perfect knowledge about the prices being asked by all firms. In this way the market price is determined by the collective interaction of all the firms and consumers, and each firm has to accept that one particular price is the price at which they can sell the product. They have to “take” the price, not make it.

The standard representation of Marshall’s perfectly competitive industry (see below) demonstrates this idea. For instance, at any moment in time there will be a world price of wheat—such as $350 per ton—which is determined by the industry. At this industry price (shown as a dotted line in the graph), each farm can sell as much as it likes, but it will sell nothing at any price higher than this (because buyers can go elsewhere). Farms can choose to sell at a lower price than other farms if they desire, but this would be of no advantage to them—a lower price will not attract extra demand, because in perfect competition each farm is a tiny part of the total world supply (in wheat, this is around 700 million tons).

By lowering the price, the farm would merely lower its profits. The farm has only to decide what output it needs to produce to maximize profits. In the case demonstrated by the graph, it is 3,000 tons, which the farmer knows can be sold for $350 per ton.

Laborers will seek those employments, and capitalists those modes of investing their capital, in which… wages and profits are highest.

In this example, the farm is selling wheat for much more than the cost of producing it. By selling 3,000 tons at $350 per ton, the farm’s revenue is $1.05 million; its costs, however, are $450,000 ($150 × 3,000 tons). The farm’s profit is revenue minus cost—in this case, $600,000. This is an example of what classical economists such as David Ricardo describe as “the market price moving away from the natural price.” However, in a perfectly competitive market these high profits cannot be sustained in the long term.

In the perfectly competitive industry price remains the same regardless of any individual firm’s level of output. A firm will expand production until it reaches a level beyond which any further production would cost more than the goods’ selling price. 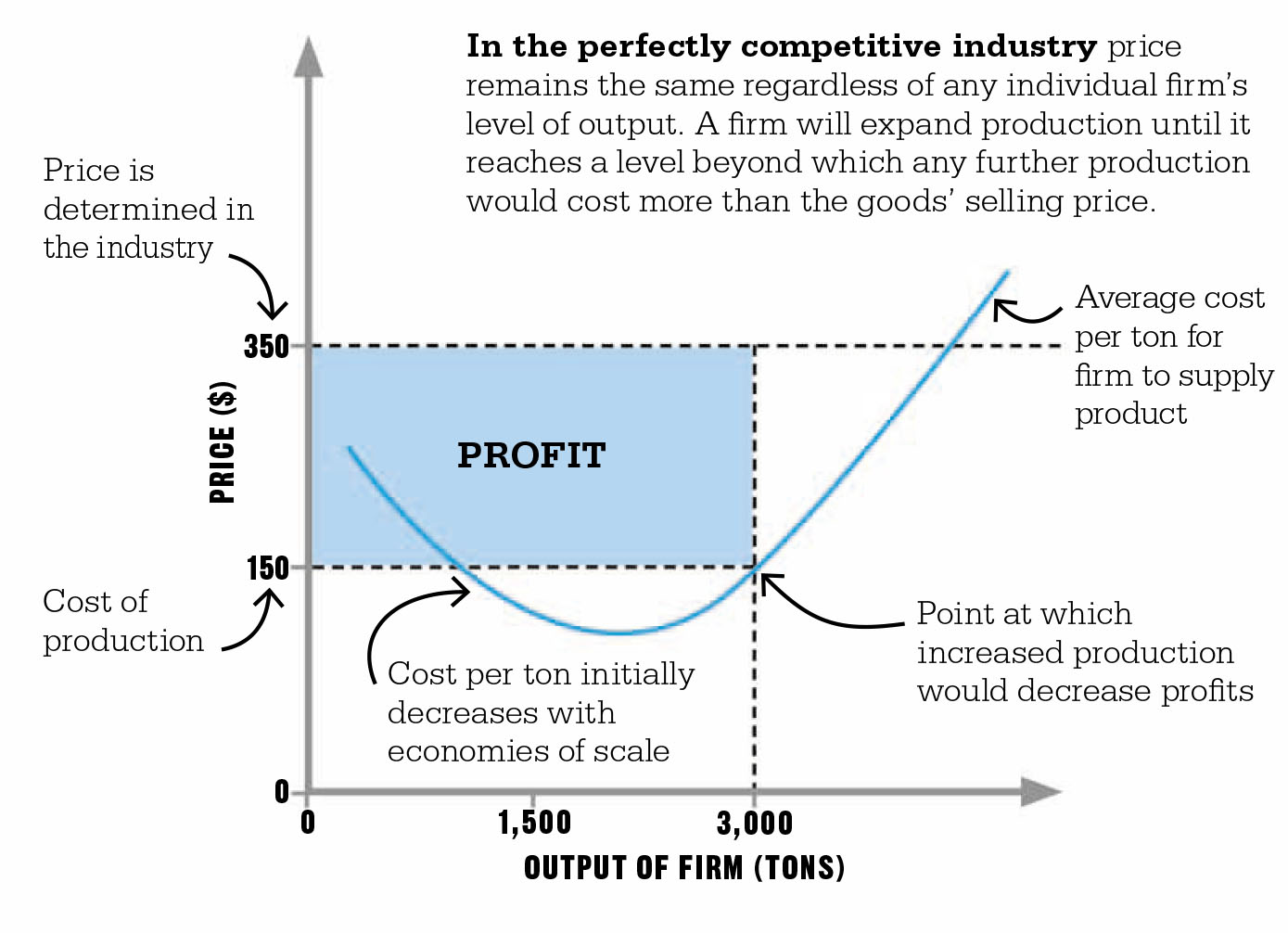 Classical economists such as Smith and Ricardo were well aware of the consequences—in competitive markets—of a price being well above that required to cover costs. The high level of profits would act as an incentive for new firms to enter the industry. The lack of barriers to entry in a perfect market allows any firm to enter the market easily. In our example it is easy to imagine farmers switching out of barley production and into wheat production if wheat is more profitable to produce. The impact of the new entrants would be to increase total supply, and through competitive pressure drive the price downward, so that in a short time firms would only be able to make a “normal” level of profit.

This would be when the price just covered the costs of production— the excess profits (shown on the graph in blue) would vanish.

When the assumptions that underlie perfect competition are violated, firms can make large profits in the long run. For instance, if there are any barriers to entering an industry—such as technological or legal barriers—excess profits do not get competed away. The most extreme form of this is that of a monopoly. To maximize profits, a monopolist charges a higher price and produces less than would be the case in a perfectly competitive market. This is why economists believe that perfectly competitive markets are more socially beneficial than monopolized ones. Under conditions of lower output produced by a monopoly, consumers could gain from extra units of production.

But in perfectly competitive markets, these extra units are produced as more firms enter the market—prices drop as high profits are competed away.

There are a number of controversies around Marshall’s model of perfect competition. First, there are few—if any—real industries that come close to the assumptions required for the model to be useful. In fact, both currency markets and agriculture are unlikely to be good examples of the theory of perfect competition because of the existence of large firms that can influence price, and because governments can and do manipulate these markets. The defenders of perfect competition argue that the model represents a theoretical, ideal form of market structure that is useful for understanding how firms behave, even if there are no industries that actually meet its requirements.

A more fundamental criticism is that perfect competition as described by Marshall has lost its real meaning; in fact, there is no “competition” in the model. Firms are seen as making identical products, responding passively to prices, and accepting that they will end up making normal profits. This is a long way from the situation suggested by Smith, where firms desperately try to make different, higher-quality products than their competitors, which they seek to sell at higher prices, while also intermittently introducing new technologies to reduce their costs and consistently raise profits.

Attacks on perfect competition around this point continued through the 20th century. The Austrian-born British economist Friedrich Hayek argued that competition is a dynamic discovery process in which entrepreneurs seek new profit opportunities in a world of constant change—it is not simply the sterile copying of prices suggested by Marshall’s model.

Marshall on risk, uncertainty, and profit

In 1921, US economist Frank Knight published Risk, Uncertainty, and Profit, which analyzed the effects of uncertainty on Marshall’s model of perfect competition. Knight defined risk as a measurable uncertainty, such as the chance of a champagne bottle exploding. The proportion of bottles that burst is practically constant, and the producer can therefore add it to costs or insure against it. For this reason risk does not disrupt the competitive equilibrium; entrepreneurs do not earn profits as a reward for taking predictable risks. On the other hand real uncertainty is immeasurable—it comes principally from not being able to see into the future. For Knight, entrepreneurs accept the responsibility of working with an uncertain future and take decisions on this basis. The amount that entrepreneurs will earn is unknown because the future is unknown.