Definition and trends within Purchasing Management

The aim of this chapter is to provide the reader with an introduction to Purchasing Management in order to fully appreciate the book. The chapter presents the book's definition of Purchasing Management as well as briefly presenting the potential benefits with working at a strategic level with purchasing activities for a corporation.

Furthermore, trends and historical developments within the area of Purchasing Management will be presented.

Others, however, will not have this knowledge and for this reason this chapter also presents and outlines the trends and events that led to the current state of the art. The devel0pments, which this book will focus on, are the ones of the second half of the 20 th century. The emphasis will be on the 1990s, since that period of time includes the most significant developments within this topic.

“Strategic purchasing is the process of planning, implementing, evaluating, and controlling strategic and operating purchasing decisions for directing all activities of the purchasing function toward opportunities consistent with the firm's capabilities to achieve its long-term goals”.

The business network is defined as a network of activities, resources and actors (Ford, et al., 2003). On the internal side of the business network the activities are often represented of internal process within the own organization and resources are often owned by the focal firm. The actors here are usually employees or departments within the corporate organization.

The purpose with this book is to cover the conceptual model by describing the various elements of the model into the books different chapters. Furthermore, the purpose of the book is to present a state-of-the-art way of operating and manage purchasing activities. This will be done by presenting some successful guidelines and methods based on both literature and real business case examples.

The impact of Purchasing Management

A large study based on 175 company surveys with a response rate of 22% performed by Carr and Pearson (2002) shows that the factors strategic purchasing and Purchasing Management have a positive impact on the firm's financial performance in both small and large firms. Carr and Pearson (2002) also write that Purchasing Management and supplier involvement does affect the success of a new product introduction.

This study also shows that a link exists between the implementation of strategic Purchasing Management and the achievements of a firm's comprehensive goals. It is also stated in the report by Carr and Pearson (2002) that it is believed that most firms recognize the importance of strategic purchasing because they spend a large percentage of their sales on purchased inputs.

Carr and Pearson (2002) also finish their study with the words “Based on this study, management should better understand the importance of Purchasing Management, supplier involvement, strategic purchasing and its relationships with firm's financial performance.

To complement the findings of Carr and Pearson (2002) one additional study, made by Ellram and Carr (1994) was selected. That study clearly indicates that purchasing strategy should be a part of the overall corporate strategy. The movement toward global sourcing, rapid changes in technology, and increased competition requires purchasing to assume more responsibility in the planning and implementation of strategies to support the overall corporate strategy. Suppliers do also more and more stat to play a critical role regarding the support of a firm's competitive strategy.

Ellram and Carr (1994) also define four stages of purchasing organization related to the level of strategy development. The four stages are:

Stage II is an independent stage where the purchasing departments spend considerable time attempting to professionalize the own purchasing function by introducing such things as computerized information systems, formalized supplier programs and communication links.

Stage III is a supportive stage where the purchasing departments are viewed by top management as an essential business function. The purchasing organization is expected to support and strengthen the firm's competitive advantage by providing timely information to all surrounding departments in the firm about for example potential changes in the price and availability of goods and services which may impact the firm's strategic goals.

Stage IV is the integrative stage, in this stage, the firm's competitive success rests significantly on the capabilities of the purchasing department's personnel. The purchasing department's role within the firm is also changed from facilitator to functional and this development process must be implemented, significantly supported and guided by management. The long-term perspective is also of great important regarding development to this stage.

History and trends within Purchasing Management

Procurement is regarded by executive management as a negative function — it can hinder the company if not done well, but can make little positive contribution (Henderson, 1975)

This was stated in the mid 1960s, by the purchasing professional Bruce D. Henderson, who spoke about the situation and opinions regarding purchasing at the time. He argued that purchasing was a neglected function in most firms because off executive management's belief that it was not important or relevant to mainstream problems.

Over the past three decades, purchasing has slowly started to gain visibility in firms all around the world. This evolutionary process has been slow in words of time due to the fact of continuous general management failures. Managers have failed to understand the critical role of purchasing and thereby not focused on its issues and strategies. Ammer (1989) noted that prior to the 1973-74 oil crises, top management viewed purchasing as having a passive role in the business organization. But a major point in the recognition of purchasing strategy occurred when Porter (1980) emphasized the importance of the buyer in his model of the five forces that impact the competitive nature of an industry.

The 1980s marked the beginning of a shift in attitude towards including the purchasing role in corporate strategy. In the 1970s and early 1980s, purchasing took a supportive role, ensuring that supplier quality met the required standards for production. During the 1990s, the literature indicates a movement toward integrating purchasing into the firm's strategic planning process. Today, the purchasing department's ability to impact strategic planning has increased in a number of firms. (Carter, et al., 1996b). 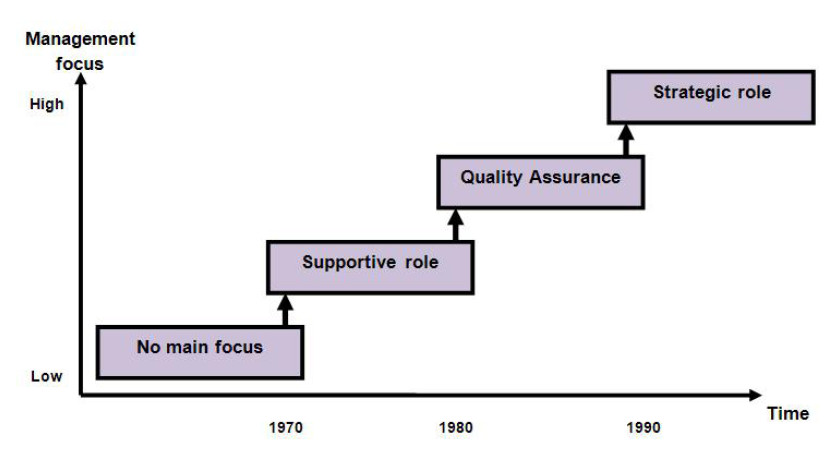 Trends within Purchasing Management in the 1990s

As mentioned above, Purchasing Management has undergone a high degree of change since its neglected state back in the 1960s. This is particularly true for the 1990s, where there was a great change in opinion regarding purchasing. According to a yearly survey conducted at Michigan State University, the perceived importance of suppliers and purchasing/sourcing increased significantly during the 1990s and was widely acknowledged by executive managers by the end of the decade.

By this time several researches argued that the performance of the purchasing functions did in fact affect overall company performance and that it should be considered as part of the corporate strategy (Johnson, et al., 1998). A study performed by Kemppainen and Vepsalainen (2003) also showed that the perceived importance of purchasing, compared to other functions, had increased significantly from then 1990s to the start of the naughtiest. This trend was most likely supported by the increasing status of Supply Chain Management.

According to Trent and Monczka (1998) the increase in supplier importance is a result of at least five factors that affect most industries:

The shift since 1990 in purchasing responsibilities reveals a large-scale movement away from tactical commitments and movement toward strategic or value-adding tasks.  The trend towards strategic purchasing was also evident in the results from the 1994 North American Executive Purchasing Roundtable.

The 1990s also saw the start of EDI and system development. The use of these systems grew yearly in the 1990s but the rate of growth was newer meet the predicted rate.  At the 1994 North American Executive Purchasing Roundtable it was concluded that EDI and increased use of information systems was both ranked amongst the top five most significant trends. Other studies, however, show that the outsourcing of IT grew dramatically during the 1990s since it was not considered a core competence. (Kakabadse, et al., 2002)

During this period emphasis also grew on the use of cross-functional teams to support sourcing decisions, such as evaluating, selecting, and managing suppliers. There were, however, still many firms who did not succeed in establishing such teams despite their willingness (Trent, et al., 1994). The emphasis and subsequent use of cross-functional teams does however seem to be increasing. In 1990, less than half of firms included in the Michigan survey stated that they emphasized the use of cross­functional teams. This number had increased to over 75 percent by 1997. The study also found that purchasing groups organized around commodities decreased while groups organized around end item increased during the 1990s.

The 1990s also witnessed an increased focus on the concept of corporate social responsibilities (European Commission, 2001) (Carter, 2000)as well as that of green or environmental purchasing. By the end of the decade green purchasing efforts were, however, still largely reactive. There were also many obstacles, primarily economical, which prevented green purchasing from becoming effective.

There is evidence of an increased dependence on suppliers for product technology. According to the study conducted at Michigan State University the reliance on external sources for product technology increased from 37 percent to 44 percent between 1993 and 1997. Concentrating on core competencies and technologies and an increased emphasis on outsourcing non-core processes are factors that contributed to the growth in external reliance.

Furthermore, pressure to include the latest technology in product designs makes supplier contribution increasingly important. According to the study executive management's awareness of the importance of the supplier's role in supporting product development increased steadily during the 1990s, growing from 4.5 in 1990 to 5.9 in 1997 (where 1 = limited importance and 7 = significant importance).

Close to 75 percent of firms taking part in the Michigan survey decreased the number of suppliers they maintained between 1993 and 1998. Furthermore, over 80 percent of the firms expected a continued reduction in the size of their supply base through the year 2000. The reductions in supplier numbers were however most aggressive as the late 1980s and early 1990s. A survey conducted by Carter and Narasimhan (1996c) also showed that firms were expecting to decrease their supplier base.

Traditionally the approach to supplier evaluation, if one existed within a firm, in purchasing was focused on price, quality and delivery. These factors are still the most used but some firms have started to supplement them with other factors relevant to the industry. This can improve the purchasing firm's ability to choose the most suitable supplier. Examples can be a supplier's process capabilities, equipment and quality management. Other important factors can be communication and continuous improvement efforts.  Companies also increased their understanding of the benefits of having a formal way of evaluating and retaining suppliers.

Furthermore, it is reasonable to believe that the increased emphasis on green purchasing and corporate social responsibility (European Commission, 2001) has also started to influence the supplier selection processes.