The classical model was a term coined by Keynes in the 1930s to represent basically all the ideas of economics as they apply to the macroeconomy starting with Adam Smith in the 1700s all the way up to the writings of Arthur Pigou in the 1930s.

In this chapter I will describe the main characteristics of what we now call the classical model and how the macroeconomic variables are determined in this model. As discussed in the previous section, we focus on the cycles and all the components included in the GDP (consumption, investment, imports and exports) are variables where the trend has been removed.

We begin by describing the classical model of the labor market.

Profit-maximizing firms will want to employ labor up to the point where the marginal product of labor MPL is equal to the real wage W/P. We have previously assumed that MPL is decreasing in L and the demand for labor can be illustrated in the following graph. 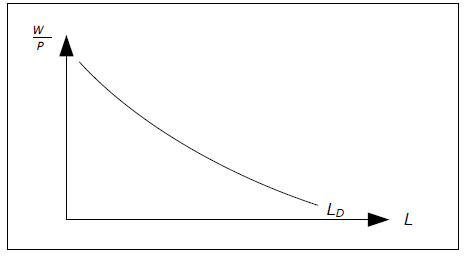 In the classical model, markets are characterized by perfect competition and the firms cannot affect W and P. However, they do decide how much labor to hire. If you sum all the labor that firms want to hire you to get the total demand for labor.

The supply of labor

Equilibrium in the labor market

Without government intervention and trade unions, the labor market will always be in equilibrium in the classical model. This means that the real wage will be equal to the equilibrium real wage – the level of real wage which will equilibrate the labor demand and the labor supply. 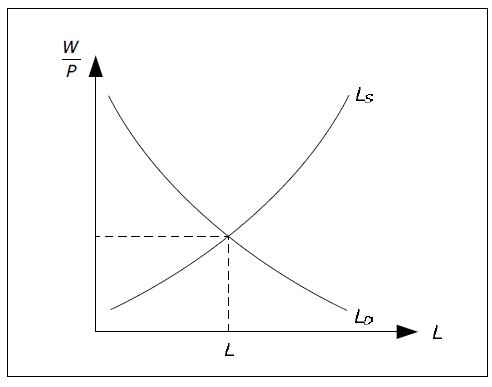 It is also clear from the graph that the total amount of labor L is determined in the labor market. When the real wage is equal to the equilibrium real wage, the supply of labor is equal to the demand for labor and this is the amount that will be used in the production. We then have full employment (see Wages and income).

YS = f(L, K) in the classical model where

L is determined in the labor market while K is exogenous

The aggregate supply YS is defined as the amount of finished goods and services firms in a country will want to sell under given conditions. In the classical model the aggregate supply is determined by production function, YS = f(L, K).

The amount of capital in the classical model is an exogenous variable; it is not determined within the model but assumed to be given. Although we typically assume that K is constant – which is reasonable in the short run – it need not be constant. K may increase over time, but we must know K at any point in time. 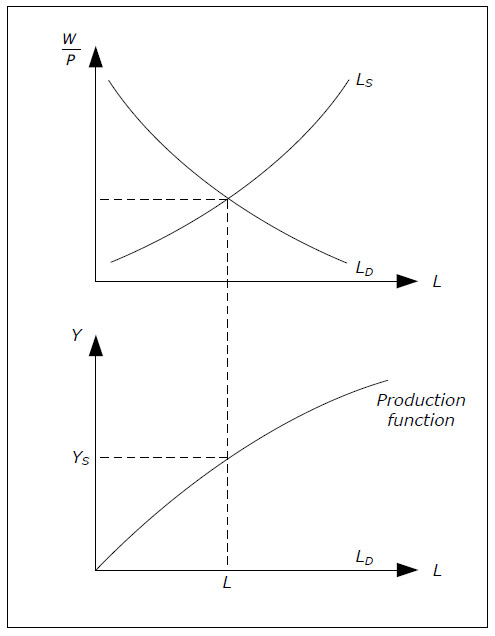 The aggregate demand YD is defined as the quantity of nationally produced finished goods and services that consumers, government and the rest of the world want to buy under given conditions.

One of the key elements of the classical model is Say's Law. According to Say's Law the aggregate demand is always equal to the aggregate supply: YD = YS.

Say's Law is sometimes stated as "supply creates its own demand". The motivation for this statement is something like this. If production (YS) increases by one billion, the national income will also increase by one billion. This means that individuals will have exactly one more billion for spending – just enough to buy the increase in production.

Thus, YD will also increase by one1 billion. An increase in the supply of one billion has created an increase in the demand by the same amount. In the classical model, observed GDP Y will be equal to the aggregate supply: Y = YS. GDP is determined entirely by the firms and there is no need to model aggregate demand. It is always the case that YD = Y = YS = f( L, K).

How not to justify Say's Law

At first, Say's Law may seem "obvious". However, it is not – actually, it is highly controversial. The reason it may seem obvious is that you have probably learned from microeconomics that in equilibrium, demand is equal to supply. If you are outside equilibrium, prices will adjust and you will be taken back to equilibrium.

This is not the motivation behind Say's Law which is not an equilibrium condition. In the classical model, YD and YS are real variables that do not depend on the price level. This may strike you as odd. YS depends only directly on L and K and indirectly on the real wage.

The reason why Say’s law is so controversial is the following. Suppose that consumers and investors fear that the economy will slow down. They might then decide to save a substantial part of their income and aggregate demand may not be equal to aggregate supply. This is really the starting point for Keynesian economics which we will meet in the next chapter.

The price level and the quantity theory of money

The quantity theory of money

P *Y is equal to nominal GDP. Suppose that nominal GDP is equal to 100 for a particular year while the money supply is constant and equal to 20 throughout that year. Since we are using money to buy finished goods, we may conclude that every monetary unit (USD or euro or whatever) has been used an average of 5 times during the year (100/20). This value is called the velocity of money and it is denoted by V. We have

The main consequence of the quantity theory of money is the direct relationship between M and P if Y is constant. For example, if the money supply increases while real GDP stays the same, P will increase exactly as much as M (in percentage).

The price level is determined from the quantity theory of money:

Remember that Y is determined by the labor market and the production function. If we combine this with the quantity theory of money, we can determine the price level P:

Remember that we have removed the trend in Y which means that Y cycles around some average over time. Thus, Y is not constant over time but there is no growth in Y. Therefore, π = πM will still be approximately true even when Y is not constant (it will be true on average and in the long run).

If we do not remove the trend in Y, the result would instead be that inflation is equal to the growth in the money supply minus the growth in real GDP. 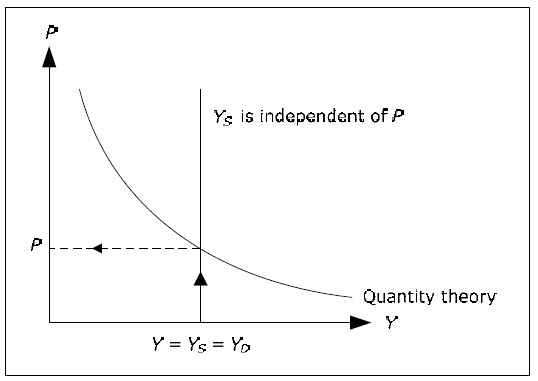 The nominal wage is equal to the real wage times the price level.

Since the real wages, W/P is determined in the labor market and P is determined by the quantity theory of money, we can also determine the nominal wage in the classical model:

From the labor market, Say's Law and the quantity theory, we have now determined W, P, Y and L. We can also demonstrate how all these four are determined simultaneously: 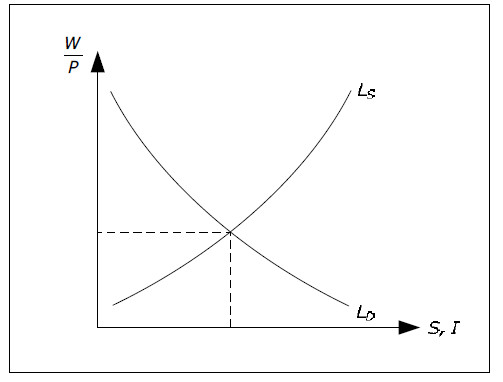 The aggregate demand for consumer goods is defined as the total amount of finished goods and services that households wish to buy under different conditions. There is no specific supply of consumer goods – firms offer final goods but do not distinguish between the supply to consumers, the supply to investors and the supply to foreigners.

Consumption is therefore denoted by C(r) and this notation makes it clear that we are talking about demand for consumption and not observed consumption.

In the classical model the supply of savings SH depends positively on the real interest rate in the classical model. This follows by the fact that C depends negatively on r. When r increases, we consume less and save more. Therefore, household savings is denoted by SH(r).

Remember that total savings is defined as

The sum of net savings from the household, the government and the rest of the world. As with SH, S may be the observed amount of savings or the total supply of savings. In the classical model, SG and SR are exogenous variables.

It depends only on exogenous variables and are therefore themselves exogenous.

Note that SH, SG, and/or SR may very well be negative. For example, when SG is negative, G > NT and the government is a net borrower. 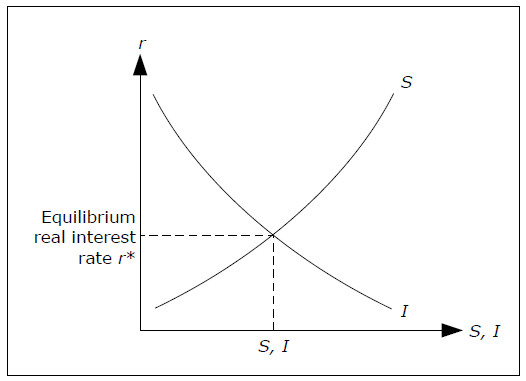 From this graph we can also determine the size of investments and savings. In equilibrium when r = r*, S = I which is what we need for the GDP identity to hold. Once we know savings, we can determine household savings from

In the classical model, expected inflation πe is an exogenous variable and since R = r + πe we can determine the nominal interest rate from the real rate.

The final variable to be determined in the classical model is consumption C. Consumption may be found in several ways which will all produce exactly the same answer:

Determination of all the variables in the classical model

The following diagram shows how all the variables are determined in the classical model: 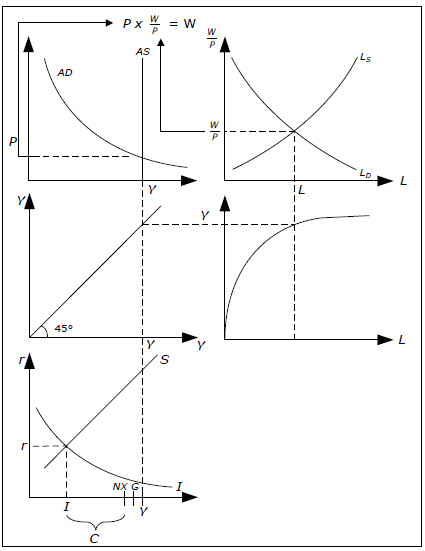 Figure 10.7 Determination of all the variables in the classical model.

We will discuss the most impact from the classical model in the exercise book, but it may be interesting to also point out here the most important: