Sourcing is the activity of securing external components or services needed within the own internal organization. Companies employ different kinds of sourcing strategies and no one is declared to be the optimum solution. Outsourcing which is the foundation to choice of sourcing strategies also intends to align with a company's core competence focus.

As defined earlier on this site, purchasing has, according to the trends, become more strategically important for companies. The importance of suppliers and purchasing/sourcing increased significantly during the 1990s and was acknowledged by executive managers by the end of the decade. This means that more emphasis has lately been taken to the sourcing strategies of the companies.

One example of this was when General Motors developed their concept Strategic Sourcing in the 1980s. Strategic Sourcing is an institutional procurement process for continuous improvement and re­evaluation of the current purchasing activities in a company. Supplier development can also be viewed as a “strategic sourcing tool”. The current trends in this area are toward more complexity in supplier assessment whether by using “finer and finer” details level in the examinations or by use of individually defined metrics for assessing a specific supplier's performance.

A source is literally defined as the point to purchase the inputs to produce goods or services. Sourcing is defined as the act of securing parts, supplies, materials, services and other items to support production. Companies purchase resources from different locations, based on the scope of their activities or services. Domestic companies usually go for local resources even if the costs would be greater than purchasing from a foreign country.

On the other hand, global companies locate resources wherever the cost is the lowest with respect to the overall cost dedicated to their finished product. One example for low labour cost countries is Mexico; a multinational company may locate its assembly line there, but still transport the raw materials from Southeast Asia for the lowest possible cost (O'Connell, 2005).

One dominant sourcing strategy is not rational throughout a portfolio of purchases where there might be willingness to compete among the various suppliers in some categories and in the others, there might be hardly any suppliers. Some categories might be more important than others especially when comparing their effects i total expenditures or on the competitiveness of end products. These are the facts that have to be considered when a sourcing strategy for a category is being decided upon.

Companies’ processes range from functional to strategic. Sourcing strategy is defined as the approach developed by the company to procure supplies, for which four elements are defined as: “the buying policy, the number of sources, the type of source and the nature of the company supplier relationship”. This is shown in Table 3 below:

Sourcing strategies are perceived as assets in accomplishment of company’s overall goals. This chapter mainly defines different sourcing strategies such as global sourcing, out sourcing, and multiple sourcing. The subsidiary purpose is to provide readers with initial picture of the advantages or disadvantages connected with each strategy.

Global sourcing is a sourcing strategy with the intention of taking advantage from global efficiencies in the purchasing (O'Connell, 2005); initially define as a defensive tactic toward lower prices of foreign products . In other words, global sourcing can be defined as strategic sourcing in today's global setting (O'Connell, 2005) where international supply management plays a key role in companies’ overall competitiveness .

A company that investigates for feasible places to find resources which can support its production is in fact employing a global sourcing strategy. Basically, existence of Global sourcing is due to supply and price differences in diverse resources. It is also clear that when local supplies are not satisfactory or the relative costs are very high, the firm begins to look for possible options in other places.

The global sourcing, similar to many other concepts, comes with specific benefits (and disadvantages) which can go beyond the initial lower cost. Such benefits can include: the learning of possible ways to do business in a potential market, acquirement of international skills or access to resources which might not be available locally, stimulate competition through development of alternate supplier or vendor sources, and capacity growth of the total supply.

In contrast, while working with each country entails specific complexities and is unique, there are risks associated with global sourcing. There are five key drivers shaping the global purchasing industry:

Another issue might be the alignment of the sourcing strategy and the company’s other main strategies, in cases like “just in time” (JIT) production, the production strategy is completely in favour of local suppliers, especially if there would be high variation in the needed supplies.

A number of major drawbacks with global sourcing can be: increased transportation costs, increased possibilities of supplies interruption which can be caused by natural disasters or political problems for example, also longer lead‐times and possibility for delays caused by weather problems for example, dependency on foreign sources of supply (O'Connell, 2005), and unexpected disastrous situations caused by change in the political climate or weather for example.

Global sourcing disadvantages might also include the hidden costs connected with cultural differences and time zones, financial and political risks due to changing economies, increased risk of intellectual property loss, and increased monitoring costs in comparison to domestic supply.

Low‐cost country sourcing (LCCS) is mostly considered under global sourcing as a broader category for a specific series of procurement activities. In LCCS, the company locates materials in countries with lower labour and production costs which lead to cutting operational expenses. The key principle behind LCCS is to achieve sourcing efficiencies by identification and utilization of the cost arbitrage among different geographies (Rae, 2005). The specific problem with LCCS is the efficient volume for transportation that companies are forced to order from areas like Asia.

Common examples of globally sourced products or services can be: labour‐intensive manufactured products produced in China, low‐cost English speaking call‐centres and low‐cost programmers’ IT work in India. These examples are for Low‐cost country sourcing only while it is important to note that global sourcing is not limited to low‐cost countries. New studies show shifts toward knowledge and design sourcing in high tech countries in Europe for example by Asian companies who feel the need for outsourcing these categories.

The issue is becoming increasingly critical because it is mainly in favour of focusing on core competence in nowadays’ “fast‐moving market” and increased competition . The decision to buy is practically made when “it is demonstrated that competing firms possess superior capabilities that leave no chance of catching up, and/or competitors are achieving superior performance”.

Some firms may decide to do both; making and buying their critical nonstandard items for keeping itsafe in the instance of troubles with the supplier. Such a policy can also be followed with the purpose of in‐house performance evaluation and competence stimulation.

There are various advantages in outsourcing, such as cost reduction in general resulting from economies of scale, specialized investments and expertise and possibility of greater concentration on the "core competence" while avoiding "peripheral" operations. On the negative side the control over the operations involved would be reduced; also, less flexibility would exist to react upon unpredictable changes in requirements. Thus the strategy entails important strategic and the operational implications to consider.

The problems with outsourcing depend on the type of outsourced items or services and their importance; in many cases for example the purchased goods lack high quality or good delivery where as for fundamental services there would be a great potential threat entailing development of new competitors in the market. Following the Kraljic model to choose outsourcing suitable item categories in the system, the ones recommended are non‐critical and leverage items, both located on the left side of the matrix, indicating low supply risk. The Kraljic model will be presented in detailed in the chapter

Using multiple sourcing i.e. purchasing from several resources, is conventionally preferred to single sourcing (O'Connell, 2005) or sole-sourcing (Cavinato, et al., 2000). And this is due to desirability of having reaction flexibility to strategic consequences of source failure while having more negotiating power in comparison with possible outcomes from single sourcing strategy such as economies of scale, (Segal, 1989) and especially for a satisfactory supplier, their “tacit recommendations” and easier relationships and operations management (Cavinato, et al., 2000).

In the real business world, it would take management authoritative belief in multiple sourcing strategies to make use of alternative approved suppliers permanently. This is due to several reasons which are in favour of sticking to current suppliers, such as possible inertia, pressure of work, established relationships' strength, or perceived switching costs (O'Connell, 2005). Using market research as the basis for sourcing strategy decision making, multiple sourcing may be a good option if it was revealed that there is potential for “supplier dependence, limited industry capacity, lack of price-volume discounts, and location-specific needs” (Nicosia, et al., 2006).

In fact changing suppliers can be disruptive, time consuming, resource intensive, costly, and even career threatening for purchasing staff in case of making mistakes. To implement such changes in the company, clear benefits have to be identified to overcome systemic inertia, accumulated personal commitment, alternative work priorities, and switching costs (O'Connell, 2005). It is also important to obtain additional data about suppliers with conflicts. This based on assumption of potentially critical issues are involved (Cavinato, et al., 2000).

Many professionals believe that managing sourcing relationships as partnerships, whether upstream or downstream, can lead to a considerable competitive advantage for the partners involved. While partnership sourcing is mainly defined as a sourcing practice selectively based on a single supplier providing the customer with extensive access to the operations and management systems of the supplier over an extended pre‐arranged period, it should not be limited to relationships that focus on single sourcing or cost reduction.

“True alliances or partnerships require extensive collaboration" meaning that seeking opportunities through the other party should be aligned with cooperative focus on cost drivers. This, results in supplier's guaranteed demand for what they can offer to the customer added to opportunities to reduce cost and step toward competitive advantage.

Figure 7 below describes the steps toward implementation of strategic alliance and partnership with the suppliers: 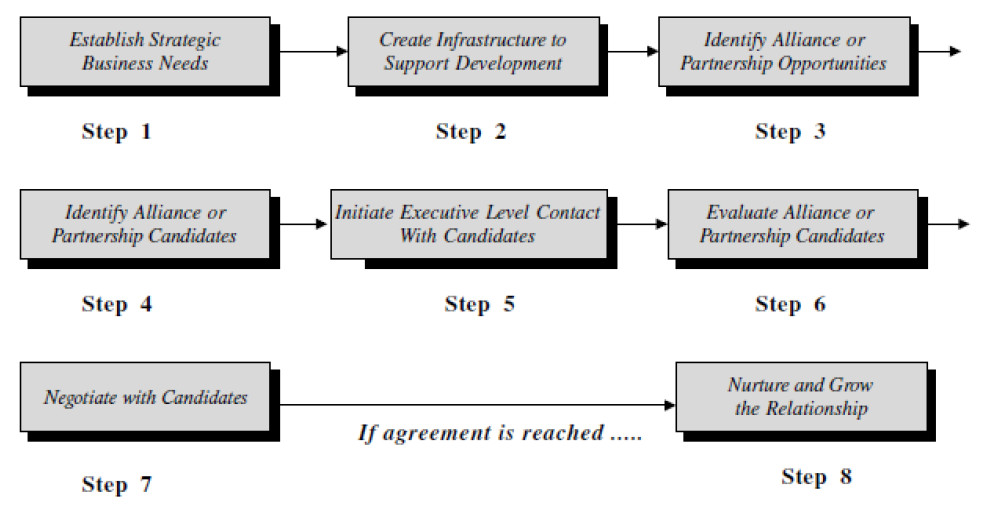 Further information regarding supplier relations and relationship management can be found in subsequent chapters of this book.