Growth models are important, for example, if you want to understand why some countries grow faster and have a higher living standard than other countries. By growth, we mean the percentage change in real GDP. We use real GDP to eliminate the effect of inflation. In this chapter, it is perfectly OK to think of inflation as being zero in which case real and nominal GDP bare the same.

In this chapter we begin by describing the aggregate production function. The rest of this chapter will look at some different growth theories.

Imagine the national economy during a short period of time (say one week). We denote:

It is still the case that L and Y are flows while K is a stock. During a short period of time, we can assume that the amount of capital is constant.

In most cases, we will not specify exactly what the function f looks like. However, we always assume that f is increasing in L and K, that is, when we use more labor and/or more capital, we will produce more goods.

The marginal product of labor and capital 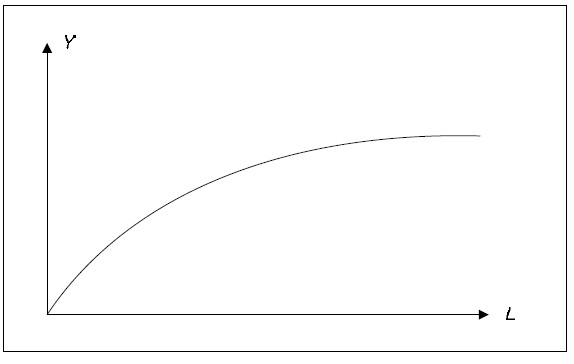 We define labor productivity as Y / L, that is, as GDP per hour worked. Labor productivity tells us how much we can produce using one hour of labor and it depends on the amount of capital as well as the technology.

From the simple production function Y = f (L, K), we can identify three sources of growth:

The first two represent the growth of the factors of production. L may increase if the population grows, if we have more individuals in the workforce, or if unemployment falls. K increases if investment are large as they are if total savings is large.

The function f need not be the same function over time. It is possible that Y increases even though L and K are fixed. When f changes so that the same amount of the factors of production will produce more output we say that we have technological progress or productivity growth. With technological progress, MPL and MPK will typically increase for given values of L and K, that is, the productivity of the factors increase.

Education and growth in human capital are important aspects of growth in GDP. Human capital is treated in different ways in the literature:

Growth Accounting is the activity in which we try to figure out how much of the growth in GDP is due to growth in L, growth in K and growth in productivity.

The production function will not provide us with a theory or explanation of growth. It is only a convenient tool that helps us breaking down growth into its components. However, there are many growth theories that try to go a step further. The oldest of these theories is the so-called classical growth theory which is primarily associated with Thomas Robert Malthus.

In short, the classical growth theory may be described as follows:

The main point of the model is that population growth will always eliminate the positive effects of technological development and GDP per capita will always return to the survival level. This very "dismal" growth theory was prominent in the early 1800s, and economics to this day is sometimes called the "dismal science".

Today we know that the predictions of the model where incorrect. During the rest of the 1800s Europe experienced a growth in GDP per capita. Although the population growth was high, it was not nearly sufficient to eliminate the positive effects of technological development.

The main purpose of another important growth model, the neoclassical growth model, is to explain how it is possible to have a permanent-growth in GDP per capita. The model was developed by Robert Solow in the 1960s and it is sometimes called the Solow growth model or the exogenous growth model.

It is not possible for the government, except temporarily, to affect the growth rate in the neoclassical growth model. The government might be able to affect GDP per capita (and this is the growth rate) but the growth rate always returns to the level determined by the technological progress. The same is true for savings. An increase in savings may have a temporary effect on GDP but it will have no effect in the long run.

There are many different explanations for technological progress. Most of them, however, have a lot of common characteristics:

Separation of growth and fluctuation

It is often useful to separate the evolution of a variable that grows over time into a trend and fluctuations around the trend. The graphs below show such a separation for real GDP.

Fig. 9.2: Growth and the fluctuation around the trend.

The left diagram shows a stylized graph of real GDP over time. It demonstrates the two important characteristics of real GDP. GDP fluctuates over time and GDP grows overtime – at least over a longer period of time. The left graph is the sum of the middle graph and the right graph. The middle graph shows the trend in GDP. The trend represents the second characteristic of GDP – the fact that GDP grows over time. The right graph shows the fluctuations around the trend (cycles) of GDP. These fluctuations around the trend represent the first property of GDP.

In macroeconomics it is common to study trends and cycles separately. The purpose of growth theory is to investigate the trend while most of the macroeconomics apart from growth theory is about the cycles. The trend is about the very long-run perspective of the economy while cycles are about the short and medium run. The rest of this is all about cycles and not at all about trends. Therefore, when you think of GDP in the remaining chapters, you should think of GDP as in the right-hand graph: GDP has cycles but no trend. Basically, we will study GDP where the trend has been removed.